***This post is part of the Spencer Tracy & Katharine Hepburn Blogathon, hosted by Crystal of the In the Good Old Days of Classic Hollywood blog. ***

Mary (Katharine Hepburn): “No. I know you can’t help thinking it’s a home.”

In my blog post last week, I admitted I wasn’t a big fan of Katharine Hepburn’s earlier work. It’s not a question of her talent, as I believe Hepburn is, hands down, one of the greatest things that ever happened in Hollywood history. But the roles she played in the 1930’s and 1940’s were a little too “in your face” for my taste and Hepburn’s natural narcissism and aggressiveness (though, to her credit, she was well aware of these flaws in her personality) were thrust into the forefront. Because of this, it took me a long time to warm up to Hepburn. And I’m not the only one. The Silver Screenings blog posted their contribution to this blogathon as an open letter from a reluctant admirer, voicing the same thoughts I do about Hepburn’s enormous talent but rather off-putting personality.

My warming up to Hepburn is largely due to her later work. I started to see some of her films from the 1950’s onward. I feel Hepburn’s best work began around this time. Her roles were much more complex, requiring her to display the range of acting ability and talent I think she always had but didn’t always come through in earlier films. I also love her choices in roles, as many times her characters were strong, eccentric, and more intricate than the earlier roles. Hepburn’s most fascinating films for me were those where Hepburn’s enormous talent was paired up with the complex family dramas of playwrights like Tennessee Williams (Suddenly, Last Summer (1959) and The Glass Menagerie (1973)) and Eugene O’Neill’s Long Day’s Journey Into Night (1962).

O’Neill’s lengthy play already has a lot going for it. Published well after the author’s death by his own request, the Tyrones, the family portrayed in the play are, in Steven Mears’ words, “modeled closely on the playwright’s own [and] confront their bitter failings and long-held resentments” (par. 3). Although the story takes place within on summer day in a supposedly simpler era (the exact date is 1912), the story itself is emotionally intense and chaotic. Bosley Crowthers, in his New York Times review, describes the story as “an exposé and a shattering clash of all the skeletons in [the Tyrone family] closets [continuing] on into the depths of night…” (par. 5). The plot does indeed lead the audience into the downward spiral of this dysfunctional family. Hepburn’s Mary Tyrone, the matriarch of the family, is the engine that drives this out of control descent despite the fact that she is presented as a turn-of-the-century wife and mother who has given up everything for her family, her life confined to those roles, as women were expected to do in those days. 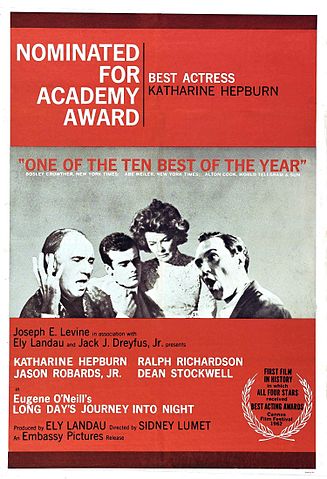 Although I haven’t seen all of Hepburn’s films, either the earlier and later ones, from those I have seen, I think Hepburn’s role in O’Neill’s play is by far one of the most psychologically complex. She is constantly balancing many extreme emotions –sweetness, an “everything is going to be alright” optimism she doesn’t feel but that her dysfunctional family depends on, fragility of a recovering drug addict, comfortor to her narcissistic husband James (played by Ralph Richardson) and maternal caretaker of her sons Jamie and Edmond (Jason Robards, Jr. and Dean Stockwell). Crowthers insists “Katharine Hepburn is tricky and uneven in the difficult role of the wife and mother in this divided family—probably because she has too much to do” (par. 9) and while I agree Hepburn’s role is tricky and uneven, this is exactly what the role warrants. Hepburn seems to have understood not only Mary’s state of mind as a cog in the wheel of this dysfunctional family but also, on a broader level, as a woman caught in the net of social limitations and not just because she was a woman. She constantly reminds me of a butterfly stuck in the cocoon dying to get out but unable to, fluttering her wings in between periods of quiet until at last she is too exhausted to put up a fight.

I think the greatest strength Mary Tyrone has is that she is, unlike her husband and sons, as many clear visions as she has delusions. As Mears says,

“Mary is the member of the [family] quartet most entrenched in what the denizens of O’Neill’s The Iceman Cometh would call “pipe dreams,” but at the same time she holds the fewest illusions about the family’s trajectory.” (par. 5)

It is this simultaneous balance between fantasy and reality that makes Hepburn so fascinating to watch in this film. One moment she is reminiscing about her years as a girl in a convent and the next she is hurling accusations against her husband for forcing her to follow him in his gypsy existence as an actor on the stage but then she petals back to reliving her excitement in meeting and falling in love with James Tyrone, the greatest matinee idol of the time.

Another aspect of the character Hepburn seemed to understand was the isolation and loneliness a pre-feminist era woman faced in a house full of men. Mary essentially exists on two levels. The first is the wife and mother who keeps the family on an even keel, mostly through denial and “putting on a happy face” so that the others can maintain the illusion of the shiny, happy family. The other is a bitter and disappointed woman whose dreams of becoming a nun or a pianist were quickly squelched by her husband’s egotism and her sons’ neediness. 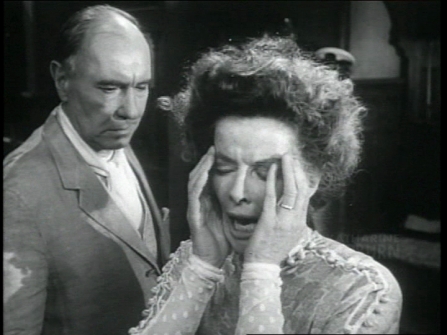 Photo Credit: screenshot of Katharine Hepburn and Ralph Richardson from the trailer of Long Day’s Journey Into Night, 1962: ScreeBot/Wikimedia Commons/PD US no notice

Interestingly, what breaks the barrier between the two roles is drugs or, more specifically, morphine. It is only when Mary is under the influence of the drug that she picks away at the façade hiding the despair and failure that permeates everyone in the family and reveals the truths the family have been suppressing for years. During these drug-induced confessions, the audience sees the real Mary just like they see the real James and the real Jamie, and Edmond (I’m not going to get into specifics so as not to give away spoilers).

Also ironic is that the morphine addiction is where Mary holds the most control in her very controlled life. It’s clear she has relinquished all power to James (even so far as to have allowed her husband to force her to have another baby when a child in between Jamie and Edmond died). But when it comes to her addiction, she controls the men in her family. It’s fascinating to see how Mary can instantly put them on pins and needles by just mentioning she is going to the pharmacy (because they know she is going only to have her morphine prescription filled) or to the spare room (where she goes to “get high”). Hepburn knows how to use voice inflections. Her tone is sweet and light (reminiscent of the light-hearted and somewhat flippant Susan in Bringing Up Baby (1938) but her used to a much more insidious purpose) when she is in her fantasy world but when the cracks in the façade begin to show in her morphine haze, her voice hardens and becomes edgy, her words shooting like an arrow (recall Eleanor of Acquitine’s “I am not moved to tears” in The Lion in Winter). Director Sidney Lumet also helps here with space and lighting:

These tactics not only emphasize Mary’s fantasy life but also the isolation and loneliness she has felt all her life coveted by the needs of her husband and son.

It’s ironic that Stanley Kauffman, in his New Republic reflection on the film believed “[a]n actress of lesser talent and perception, better suited to the role [of Mary], might have had greater effect” (par. 9). I think it’s exactly Hepburn’s talent and perception that makes Mary work in O’Neill’s sometimes tedious and heavy-handed play. Lumet agreed, as he wrote, “‘Though [Hepburn] had played great roles… nothing could compare with Mary Tyrone for psychological complexity, physical and emotional demand, and tragic dimension’” (as quoted in Mears, par. 6). Obviously the powers that be of the Oscar awards that year agreed. Hepburn was nominated for one of her eleven Academy Awards for this role. I wish she would have won it, as the depth and scope of the psychological reality Hepburn brings out in Mary Tyrone makes it, in my opinion, one of the best roles of her extensive career.

11 thoughts on “Thinking of a Home: Katharine Hepburn in Long Day’s Journey Into Night (1962)”