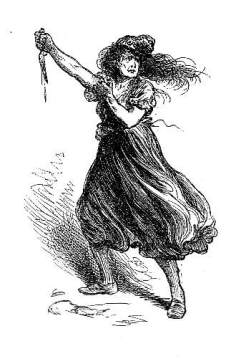 “Writing a tale that seeks revenge, you’ll quickly see that tale as merely a list of hurts, which, when you get to the end of that list, is a list that may not interest even you anymore. Revenge as a topic is good; as an intent, it’s not.” (Roach Smith, par. 8)

Some time ago I wrote a blog post about the purpose of writing where I talked about some of the reasons why writers write. I recently finished reading a biography about the movie icon Marlene Dietrich titled Marlene Dietrich: The Life, written by Dietrich’s daughter, Maria Riva. As I read it, I couldn’t help but think about the infamous 1978 biography written by Christina Crawford about her mother Joan Crawford, Mommie Dearest. Both books show another reason, right or wrong, that writers decide to write a book – so they can pen their own story of revenge.

Beginning writers are often discouraged from writing for vengeance. As Mardi Link points out in her blog post about writing to get even, “[w]riting out of some twisted and infantile need for revenge, the conventional wisdom goes, is bad form, bad news, and just plain bad juju” (par. 1). Many experienced authors frown on this as well, such as author Helen Sellers who insists “‘[i]f someone is writing to take revenge, or embarrass or punish someone, it’s not going to be a very good book. It’s immoral, and it’s bad writing…’” (as quoted in Link, par. 2). The idea is that writing, although personal, is not narcissistic and writing for vengeance can turn into a narcissistic act that has no place in literature.

But I think Riva and Crawford’s books might show that writing for vengeance is not a black-and-white issue. I say “might” because from my research, I believe that both writers did not write specifically for vengeance though this may have been in the back of their minds and not necessarily unconsciously. An article in The Guardian written by Elizabeth Day, Day discusses how Christina Crawford “has never been able to shake off the suspicion that the book was revenge for her disinheritance, nor… does she entirely disabuse… this notion” (par. 23). Similarly, Carlyn Jones, in her review of Riva’s book in The New York Times, says, “Ms. Riva adopts a tone more sorrowful than angry, but the bitter animus behind her book cannot be disguised” (par. 3). And in a People magazine interview with Riva, she declares, “‘… in my book there is no such thing as being exempt from exposure if you deserve it, no matter who you are’” (as quoted in Hutchings, par. 3; emphasis mine). The tone of “bitter animus” liberally permeates both books.

The history of Christina Crawford’s life with her mother Joan has become a cultural icon and, in some circles, a bit of a campy one. Behind the façade of the Hollywood star was a physically and emotionally abusive mother: “Mommie Dearest [is] a blistering autobiography that portrayed Joan Crawford as a sadistic perfectionist, an alcoholic prone to unpredictable squalls of maternal fury who would punish the mildest misdemeanours with disproportionate force” (Day, par. 6). For Christina Crawford, the idea of exposing the truth behind the façade was a big motivator for her to write the book, as she tells Day, “‘It was the hypocrisy of it that was so difficult… People fantasised about who or what I was; that I had this privileged, wealthy, film-star family life. I didn’t have any of that’” (as quoted in Day, par. 5). Over the years, Crawford held fast to her more noble reasons for writing the book, including her desire to give a voice to child abuse. When the book was reissued in 2008, Crawford still maintained “‘[t]he reason I am reissuing it is because it remains one of the only real, authentic stories of family abuse, and it is important it is continually available’” (as quoted in Day, par. 22). To be fair, the book was groundbreaking for its time. In the late 1970’s, domestic violence wasn’t a big topic of conversation in social and political activist circles, as it was considered a “private” matter. Crawford’s book was part of what helped to bring the discussion out into the open, encouraging the third-wave feminist movement in the 1980’s to put domestic violence on their agenda.

But it’s hard to get away from the idea that there were less noble motives behind Crawford’s book that overshadowed the more noble ones. Perhaps the most potent act of vengeance in Mommie Dearest was that it completely shattered the image of Joan Crawford the actress for many years. Day quotes one of Joan’s great-grandchildren as saying “‘[t]he book was such a juggernaut, and it devastated [Joan’s] personal and professional career’” (as quoted in Day, par. 26). The book made it difficult to separate Joan Crawford the actress from Joan Crawford the person, shading her professional career with the atrocities of her personal life.

Riva’s book does something very similar. Although Riva, according to Marlene Dietrich: A Life didn’t suffer physical abuse, her mother (and her father, in a different way) was emotionally abusive to the extreme, including an insidious type of emotional abuse called emotional incest. Riva’s book uses wicked humor and fictional (and sometimes elaborate) monologues supposedly coming out of Dietrich’s mouth to depict the “real” Dietrich behind the mask. In fact, Riva “depicts a Dietrich so monstrously selfish that she wanted her daughter to become a lesbian so she would never have children of her own, never desert her poor mother” (James, par. 4). Like Mommie Dearest, Riva’s book “[does] serious damage to the Dietrich myth…” (Hutchings, par. 1) and like Crawford, it’s not a stretch to believe that this was one of Riva’s intents, born out of a need for revenge against the abuse she suffered.

The problem with both biographies for me is that the tone of vengeance takes over so completely in places that it becomes almost like taking shots at a punching bag. Link quotes another author, Tristine Rainer, who points out about vengeance narratives:

“‘It is a natural fantasy to imagine getting even with someone by exposing them in your memoirs, and revenge can fuel great writing, but for the most part complaints suffer like bad novels from one dimensional characterizations and an overly simplified Manichean vision of the world…’” (as quoted in Link, par. 3; emphasis mine)

The idea of one-dimensional characterization is an accurate description of the way that both Joan Crawford and Marlene Dietrich are depicted in the books. Both women are demonized as “selfish monsters” almost to the point of dehumanization. This is ironic, since autobiographies and biographies, by definition, are true stories about their human subjects but in these books, revenge may be getting in the way, turning those human subjects into caricatures of the Wicked Witch of the West. I’m not saying that both women were not monstrous in their behavior toward those in their care and those close to them. But neither book seems really interested in exploring much about why these women behaved the way they did, what their psychological realities were that may have led their behavior and abuse. Much has been said about the machinations of the Hollywood studio system which distorted the images of actors and actresses. I even wrote about this, including a little bit about how this distortion affected Dietrich, in my blog post for the Judy Garland Blogathon not long ago. Of Joan Crawford, Christina Crawford says, “‘[w]hat my mother wanted was fans and puppies, not human beings. She was as close to being a totally manufactured person as I’ve ever met’” (as quoted in Day, par. 13). But beyond this point, the two biographies do not go much into the past lives of Crawford or Dietrich which may have shaped their psychological make-up even before they got to Hollywood. This kind of blindness fits into the narrative of vengeance.

It is certainly understandable that some writers would want to use the power of words to not only make sense of their pain and trauma but also to get even with their abusers especially when they received no compassion and no help from the outside world and were forced to suffer alone. But I can’t help but go back to the Gabor Mate quote I opened my recent blog post about confessional memoir: writing is a way to express emotion, not heal from it. At the end of the day, there can be no healing in vengeance.