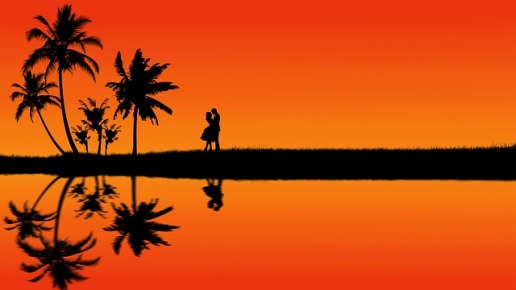 The epitome of the happily-ever-after romance ending — the handsome couple off against the sunset with the calm waters and the palm tree.

Now that my history-related blog, Mother Time Musings has launched, I wanted to return to this, my original blog, and all my fabulous readers to take about what is, I understand, one of the most talked about issues in the romance writing world – the HAE, or, happily-ever-after ending.

I confess I’ve never been much of a romance reader. I love classic romances like Jane Austen’s romantic comedies and some gothic romance stories like Charlotte Bronte’s Jane Eyre. And strangely enough, when I began writing as a teenager, I was drawn to the romance genre and tried to write like Danielle Steel and Judith Michael. I have nothing against the genre but I just felt drawn to other types of fiction and found myself leaving romance behind.

But the debate over whether to end a story HAE or not applies not only to romance.

So what is a HAE ending? It’s one that, obviously ends happily. In romance, it might be the heroine and hero end up together or together again. In the mystery genre, it’s when the criminal gets caught and convicted. In science fiction, it might be the hero or heroine saves the world from evil aliens. It’s well established in the writing world that HAE endings appeal to readers and it’s very understandable why. We get so many disappointments, traumas, pain, unfairness in life that when readers read, many want things to end on a happy note. It’s uplifting, it gives them a sense that not all is lost, it makes them feel good to see characters they’ve come to love and identify with (if the writer has done his or her job properly with the story) go off into the sunset.

But when we get to literary fiction, things can get complicated. Many works of fiction, and, indeed, other artistic mediums like film and TV, end either not so happily for the character or end on an ambiguous note where readers aren’t sure if the characters are really happy or will be happy in the future. With readers, ending not HAE is on par with writing about unlikeable characters — writers take a risk and brace themselves for some not-so-hot reviews where readers or reviewers will comment “I didn’t like the characters” or, in the HAE case, “This book made me depressed because it didn’t end happily”.

So why might writers end their stories not so happily? Because the story has taken a direction where an HAE just won’t fit and trying to make it so would come across as fake or contrived. Or else, the character’s psychological reality just doesn’t lead the story to a happy end. In a guest blog post by poet Angelique Jamail about one of her latest projects, Jamail talks about a magical realism story she wrote that ended with the main character drowning herself. She admitted, “I considered changing the story, but I knew that wouldn’t be right for the character” (Brozek, par. 10). Some characters are dark and tragic and remain so until the end of the story. There is just no “bright side” to their natures and trying to force one on them or the story is like trying to fit a square peg into a round hole.

I love the caption here of “Allyson in love…” She was in love in The Shrike (1955) as well but that love led to a non HAE ending.

Photo Credit: Cropped screenshot of June Allyson in the trailer for the film Battle Circus, 1953: Wedg/Wikimedia Commons/PD US no notice

I found this to be the case recently when I caught the classic film The Shrike (1955) on YouTube. This little known psychological drama interested me because actress June Allyson plays one of her rare non-perky blond, non-nice, non-singing characters. She is, in fact, an evil and manipulative woman bent on keeping her husband (played by Jose Ferrer) married to her at all costs even if it means committing him to a mental hospital to make him dependent on her. She has reduced him emotionally and mentally to a child but during the film, Ferrer gains some insights through his therapy on her behavior and his own. When he is finally released from the hospital at the end of the film, all we’ve seen of his life and character makes us expect that he will eventually leave his wife and go to the woman he loves (Joy Page). But instead, the ending has him reconciling with his wife after she gives him the kind of false remorse that is typical of narcissists such as the one Allyson plays in the film. So, in essence, this film tacked on an HAE to the end of the film. Why this was done is anybody’s guess (my own theory is that, given the time period of the 1950’s and Allyson’s image as the girl next door, an HAE was judged to be a better move than the kind of ending that may have suited the film better). While the film was an interesting one in many ways, I couldn’t help but feel a little disappointed by the ending.

In contrast, Emily Bronte’s Wuthering Heights ends unhappily for some of the characters but not for others. Heathcliff, Cathy, and Edgar all have unhappy endings, but the next generation of Lintons and Earnshaws, the victims of the horrors and traumas attached to the first generation, end more happily.

And this brings me to my own take on the HAE ending. While I appreciate HAE endings as much as any reader, even when a book doesn’t end happily, it doesn’t necessarily mean that ending must be unhappy. Many of my stories don’t end in the conventional HAE way but they usually contain some kind of character change or revelation that brings hope for the future. For example, during Camp NaNoWriMo recently, I ended up working on a historical romance. One of the ideas that emerged in the book was that love does not always conquer all. The ending of the book will not be a traditional “boy and girl end up happily ever after”. But the ending will not be without its ray of hope.

A happily-ever-after ending can be a beautiful thing and readers need them. We need things to sometimes work out just as we would like them to, even if it’s not the way the real world works. But sometimes, the end of the story may leave us more to contemplate or even to wish for.

2 thoughts on “Not So HAE (Happily Ever After)”